In 2011, the celebrated Australian jazz guitarist Ian Date and his band passed through Andy Firth’s home of Newcastle New South Wales, Australia as part of an Australian tour of jazz clubs and festivals that they were doing at the time. Ian had left to reside in Ireland with his wife and children some years prior and so the opportunity for Andy and Ian (long time friends and musical colleagues) to meet up to do some recording was too good a chance to miss. Consequently, in December just on the final leg of Ian’s touring schedule, he and his brother Nigel along with Melbourne based bassist Howard Cairns spent a day at Andy’s home recording to see if anything worthwhile could be achieved at such short notice and so totally unrehearsed. On the day of recording Andy and Ian set about calling a selection of favourite songs and a few neither had recorded before and the rest, as they say, is history. The session kicked off with a spirited Ian Date original called “Date Fingers” that Ian played the head to Andy a few times before they hit pressed the record button. Next came a series of great standards and a few Andy Firth originals that were all captured in a maximum one or two takes because of the precious and scarce time available for recording before the band had to get back on to the road for the next town. A total of ten tracks were recorded that day, all of which appear on this album. The very next day Andy’s good friend and ace violinist Glenn Murray came to stay at Andy’s home with a view to recording a violin sonata that Andy had written and dedicated to him. Over breakfast one morning Andy scored a violin part to accompany one his original tracks from the previous day’s session, “Far away, across the sea” and after breakfast Glenn added a sentimental and beautiful version of this music to Andy’s Celtic inspired tune. When Ian returned to Australia in 2014, Andy once again seized upon the opportunity to invite Ian to record another series of duo tracks on which Ian added acoustic and electric jazz guitar, some of which are included on this album.

The tracks and both front & back covers are contained in a zipped folder. The audio is high quality mp3 format and the covers are jpg files. Simply locate the downloaded zip file called “Dates with Firth”.zip after it has completely downloaded to your computer and double click this. The file will expand are reveal a folder called: “Dates with Firth”. From here you can access the mp3 tracks as well as the new and original artwork. The mp3 files are all number in the playlist order complete with all of the artist, song title, artwork and production information for the album. These tracks will import into iTunes any another mp player in the correct order if arranged by “name” in the player’s playlist. The size of the complete zip file is 113.5 MB 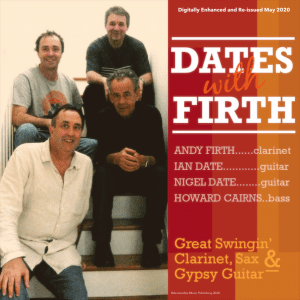 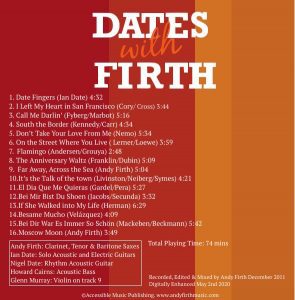 Be the first to review “DATES WITH FIRTH. 2020 Digitally Enhanced Re-Issue” Cancel reply