“Fresh Starts” was Andy Firth’s first studio album release in 1993. Andy had just turned 27 and had recently returned to Adelaide after living in Sydney working with the finest names in the jazz and classical arena. The album was recorded in Adelaide, South Australia and featured the musicians that Andy was working regularly with at the time. Sadly, a number of these fine musicians have passed away and so this album is a snapshot in time that captures some of Adelaide’s finest musicians in concert with Andy’s youthful and at times, amazing clarinet and saxophone performances. Andy’s brother Brenton, (a fine rock guitarist) makes his first appearance on an album and the young Andy Firth quartet from the time features the very youthful but now much celebrated jazz guitarist James Muller, bassist Nick Sinclair and drummer Jamie Jones-all of whom have gone on to have noteworthy careers in the Australian and overseas music industries. “Fresh Starts” was also the first time Andy had composed music specifically for an album and at the time, “Fresh Starts” was designed to display his wide range of writing and playing styles-from classical to jazz to rock to funk and even pop music styles of the time.

Celebrated jazz pianist Bruce Hancock sadly passed in 2018 after succumbing to a short but heroic battle with cancer. Bruce is captured here in the fullness of his piano prowess reading and improvising music literally still drying on the page that Andy was still re-scoring in the studio as the tracks were being recorded. Respected Australian composer and pianist Kerin Bailey makes a brief appearance on this recording after dropping in to see how the project was going. Andy’s childhood friend Kim Till makes a solo appearance on piano in “Broken Promises” and celebrated jazz bassist James Sked and drummer Laurie Kennedy provide the pizzazz and sparkle for most of the tracks on the album. A very young but talented Bradley Polain provides the rock drumming where needed and Andy’s brother Brenton adds some Ritchie Blackmore/Ian Moss styled rock guitar here and there during his debut performances on an album. “Fresh Starts” is an important and pivotal recording in Andy’s development as a performer, arranger and composer for many reasons. It is a rare and precious snapshot from a time in Australian music that can never be revisited. Fortunately, this recording has captured the vitality, excitement and ambiance of this unique time in Andy’s life and music development for all time.

The tracks and both front & back covers are contained in a zipped folder. The audio is high quality mp3 format and the covers are jpg files. Simply locate the downloaded zip file called “Fresh Starts-Andy Firth 1993”.zip after it has completely downloaded to your computer and double click this. The file will expand are reveal a folder called: “Fresh Starts-Andy Firth 1993”. From here you can access the mp3 tracks as well as the new and original artwork. The mp3 files are all number in the playlist order complete with all of the artist, song title, artwork and production information for the album. These tracks will import into iTunes any another mp player in the correct order if arranged by “name” in the player’s playlist. The size of the complete zip file is 119.7 MB 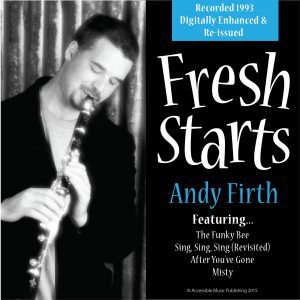