“Me, Myself & I” was inspired by Andy’s early experiments as a child with multi-tracking techniques that enabled him to layer various tracks to create a small orchestra or ensemble using two cassette tape recorders. Andy would record one part and then whilst this played back record another at the same time. He would then layer this as many times as possible before the engine noise and room ambiance became to magnified to continue. By using this method and later with much more dedicated multi-track machines such as the Tascam series of 4 and 8 tracks that he eventually acquired, Andy could hear his own arrangements played back and create small orchestra recordings. In 1988, ABC Australia asked Andy to make a recording for their jazz series hosted by Jim McLeod-“Jazztrack”. The idea of a clarinet big band was struck upon and celebrated pianist and arranger Julian Lee and Andy set about scoring a series of charts for this project. The album was recorded and broadcast on national radio but due to changes in management and recycling legislation at the ABC, tapes were reused or wiped once used for their purpose. Unfortunately, the clarinet big band project was one such recording, although Andy owns a master tape stereo mix of this entire album.

Fast forward to 1999 when Andy is invited to be a guest performer at the International clarinet conference in the USA for 2000. Andy decided to re-create the idea of the multi-track clarinet big band and set about scoring a completely new set of arrangements (apart from “Lover”), for this project. After costing out this project Andy and his wife found that to re-create this project would be in the region of $40-60,000.00 (AUD).  So a new plan was devised, one that would set Andy on a new and exciting course from there on. The plan was for Andy to buy and learn how to use home based recording software, in this case, “Pro-Tools” was the recommended choice, and after three months of reading, study and experimenting, Andy set about recording the first five arrangements to a midi-based rhythm section. One night whilst in a late night stupor he accidentally deleted a set of icons that he thought were of no consequence and in the morning discovered that these icons were the only way to open the recordings he had made. So, the project had to the started entirely from scratch. After seven months of all day recording and two months of editing traffic sounds and noisy neighbors out of the silences and breaks in the music, Andy mixed and post produced the first of fifteen attempts at a final mix that he was happy with. Finally, the master was sent away and “Me, Myself & I” returned as 1,000 boxed CD copies. After a harrowing and very nervous listen through to the entire CD three times on various headphones and sound systems, Andy went in to his studio and placed 37.5 gigabytes (one year’s work) in the trash and pressed the delete button. In 1999, 37.5 gigabytes could not practically be saved on known device that could be used on a home computer system-there was no other option. Fortunately, “Me, Myself & I” can be extracted from the original CD master as high quality uncompressed audio files and it is with these that the next part of this album’s story begins.

To celebrate twenty years since the release of this CD, Andy has gone back in to the original master disc and further enhanced the audio quality using high end digital equalization and mastering software. The resultant recording has crisp highs, fatter basses and softer sections from the original mix have been normalized and gained more presence than the original mix allowed. This enhanced, re-released digital download 20th anniversary version is dedicated to the memory of Andy’s friend and his jazz clarinet mentor, the great jazz legend, Buddy DeFranco. Buddy was Andy’s guest artist for his premiere at Carnegie Hall in 2008 and told Andy that he regarded “Me, Myself & I” as a monumental achievement and was among his favourite clarinet recordings.

The tracks and both front & back covers are contained in a zipped folder. The audio is high quality mp3 format and the covers are jpg files. Simply locate the downloaded zip file called “Andy Firth-Me, Myself & I 2020 Digital Re-issue”.zip after it has completely downloaded to your computer and double click this. The file will expand are reveal a folder called: “Andy Firth-Me, Myself & I 2020 Digital Re-issue”. From here you can access the mp3 tracks as well as the new and original artwork. The mp3 files are all number in the playlist order complete with all of the artist, song title, artwork and production information for the album. These tracks will import into iTunes any another mp player in the correct order if arranged by “name” in the player’s playlist. The size of the complete zip file is 77 MB

Me, Myself & I-Andy Firth Cover 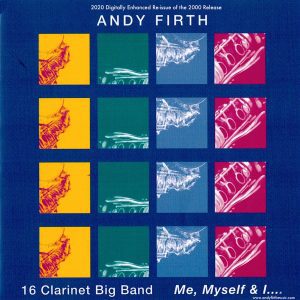 Be the first to review “ME, MYSELF & I-Andy Firth. Digitally Enhanced 20th Anniversary Re-issue” Cancel reply