“Sax to the Max!” Is a unique album of standards and original compositions arranged for Andy Firth’s “16 big band saxophone sound”. After Andy’s the success of Andy’s first multi-tracked big band album in 2000, “Me, Myself & I-16 Clarinet Big Band”, it seemed only logical and appropriate to follow it up with a saxophone Big Band version in this series. The project began in early 2005 with the scoring of 18 arrangements, (15 of which appear on this recording) which was quickly followed but a month or so of editing, re-visions and re-scoring, formatting and printing. From here, these arrangements were converted to midi rhythm section tracks so that Andy could record the saxophone parts to these with having to add the live drums first. From here, a quick mix of the album was done and ace drummer and good friend of Andy’s Nic Cecire added the live drum tracks to all but 2 of these tracks. James Jennings, a talented young drummer that Nic was teaching at the time had been previously brought to Andy’s attention by Nick as a promising talent and so Andy scored the arrangement of “Scarborough Fair” to feature James.  Nic then added percussion to the appropriate tracks and Andy began the grueling and exhausting task of digital editing, mixing and mastering. The entire project took 12 months from start to finish.

“The arrangements are sparkling, the playing exceptional and the choice of material inspired. The CD “Sax to the Max!” will be one of my prized possessions with many hours of listening pleasure.” Maestro Tommy Tycho D Mus, AM, MBE (2005)

The tracks and both front & back covers are contained in a zipped folder. The audio is high quality mp3 format and the covers are jpg files. Simply locate the downloaded zip file called “Andy Firth-Sax to the Max-2020 Digitally Enhanced Re-issue”.zip after it has completely downloaded to your computer and double click this. The file will expand are reveal a folder called: “Andy Firth-Sax to the Max-2020 Digitally Enhanced Re-issue”. From here you can access the mp3 tracks as well as the new and original artwork. The mp3 files are all number in the playlist order complete with all of the artist, song title, artwork and production information for the album. These tracks will import into iTunes any another mp player in the correct order if arranged by “name” in the player’s playlist. The size of the complete zip file is 91.5 MB

"SAX TO THE MAX" SAMPLER (reduced in quality) 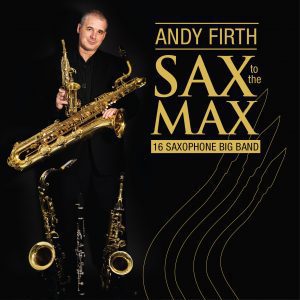 Be the first to review “SAX TO THE MAX!-Andy Firth. Digitally Enhanced Re-issue 2020” Cancel reply