Andy Firth and “Nova Swing” have already proven themselves to be the hottest small group format jazz band in the Hunter area and have quickly gained a reputation for giving sensational performances elsewhere with sell out performances wherever they appear. The eight piece band is lead by internationally acclaimed dynamo of the clarinet, Andy Firth and is staffed by some of the finest jazz musicians in the Hunter area. All of Nova Swing’s music has been expertly arranged and tailored exclusively by Andy Firth and as such, Nova Swing is able to present a variety of music from the popular roaring 1920s “Great Gatsby” era to swing, big band styles, through to the hit parade songs of the 1950s, ’60s and 70s. The band also features Newcastle singing sensation Julie Wilson as the band’s regular vocalist.

“I was delighted when Andy asked me to write the foreword for this first CD release from Andy Firth’s Nova Swing.
Under Andy’s direction they have put together a very likeable CD indeed! Andy has succeeded in putting together a professional sounding band: good high quality arrangements, very well played and I can tell that their very accomplished sound can be easily replicated in a live performance which is always a winner in my eyes. I hope that they are delighted in the opportunity to work alongside Andy, who for me, is one of the finest musicians in the world bar none! From up tempo standards to gentle ballads, this CD is so easy to listen to-such an important quality in an album.It’s just a shame I don’t tour anymore as I’d love to be able to hear them live! But hey, I have the next best thing-this CD! Once again Andy my friend, another tick in the excellent box of your many musical triumphs.

Enjoy this everyone! Andy Cooper”

The tracks and both front & back covers are contained in a zipped folder. The audio is high quality mp3 format and the covers are jpg files. Simply locate the downloaded zip file called “SUPERNOVA CD 2019-Andy Firth”.zip after it has completely downloaded to your computer and double click this. The file will expand are reveal a folder called: “SUPERNOVA CD 2019-Andy Firth”. From here you can access the mp3 tracks as well as the new and original artwork. The mp3 files are all number in the playlist order complete with all of the artist, song title, artwork and production information for the album. These tracks will import into iTunes any another mp player in the correct order if arranged by “name” in the player’s playlist. The size of the complete zip file is 108.4 MB

Andy Firth & Nova Swing very much appreciate the talents and support of: 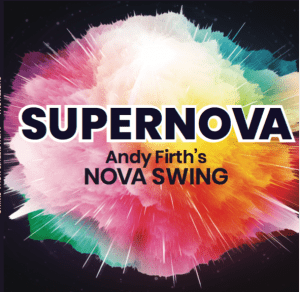