“Throughout Time” started life as a series of arrangements that Andy did in 1994 that was recorded via multi-tracking techniques onto an 8 track Tascam cassette recorder.

Andy was approached by a record company in London in late 1994 to record an album of jazz standards in contemporary styles, so Andy & Jonathan Wade set about re-creating Andy’s ideas and arrangements from the cassette tape to computer and sequencer.

Jonathan did the sequencing and keyboards for these tracks and Andy then added his clarinet to these backings over the following week.

Unfortunately, the recording company decided not to proceed with the project due to a change of artistic direction and the resulting project was never released.

This album contains two bonus tracks that were on the multi-tracked cassette tape version but not used as part of the original sessions.

“I Will Be Yours” is an Andy Firth original composition composed whilst Andy was recording “Throughout Time” but again, was never recorded due to time constraints.

Jonathan’s wife at the time Connie provided the backing vocals and Andy scored and multi-tracked the clarinet choir on “Pathetique” during a lunch break.

Andy composed “On This Night” as a dedication to his wife that he played for her during their wedding reception on 30th April 1995.

The tracks and both front & back covers are contained in a zipped folder.

The audio is high-quality mp3 format and the covers are jpg files.

Simply locate the downloaded zip file called “Throughout Time-Andy Firth 1995 re-issued 2015”.zip after it has completely downloaded to your computer and double click this.

The file will expand are reveal a folder called: “Throughout Time-Andy Firth 1995 re-issued 2015”.

From here you can access the mp3 tracks as well as the new and original artwork.

The mp3 files are all numbered in the playlist order complete with all of the artist, song title, artwork and production information for the album.

These tracks will import into iTunes any other mp player in the correct order if arranged by “name” in the player’s playlist.

The size of the complete zip file is 72.4 MB 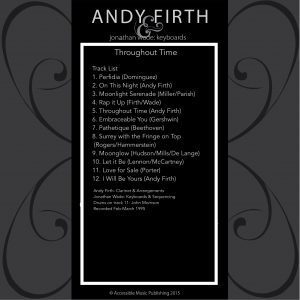