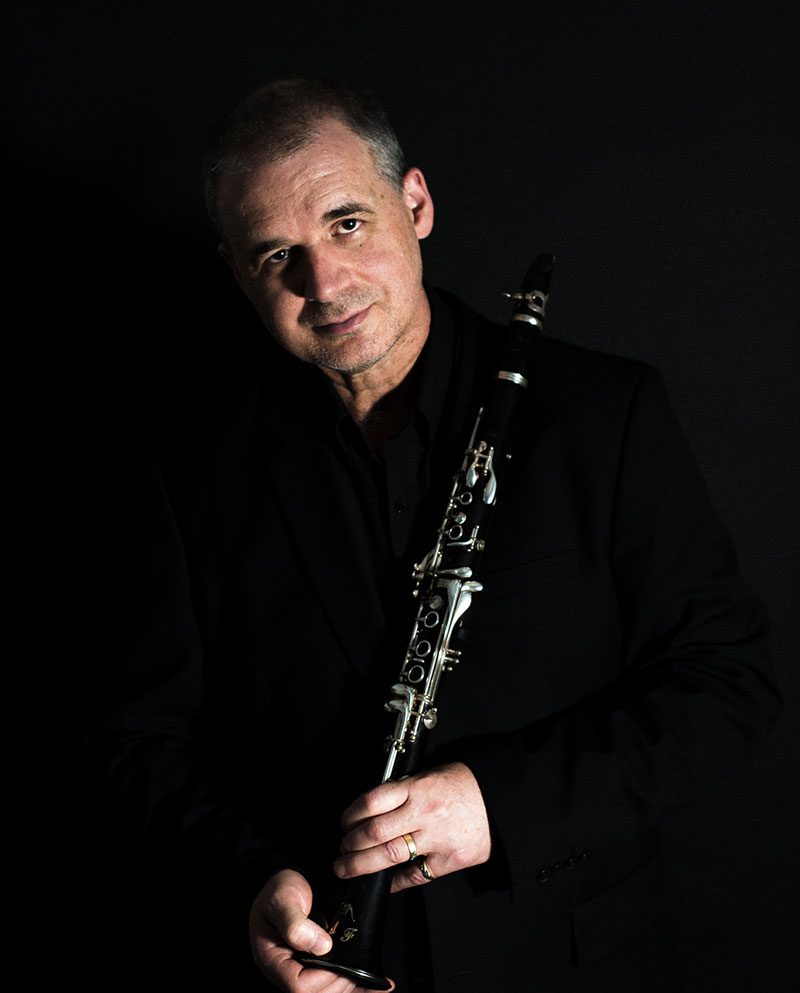 Andy Firth is widely regarded as one of the most outstanding jazz clarinet players in the world today, having played internationally with some of the best performers and ensembles in both classical and jazz music. His mastery of the clarinet and saxophone, unrivalled expression of tone and technique, and endless devotion and enthusiasm has earned Andy a reputation as a performer not to be missed! In 2008, Andy performed a “Tribute to the Great Jazz Clarinetists” with jazz clarinet legend Buddy DeFranco as his guest artist at Carnegie Hall.

As a composer, Andy has 700 compositions to his name some of which are full scale classically oriented or chamber music works. In 2013 Andy received a South Australian Jazz Archive Award for services to jazz music in Australia and an Australian MO Award for “Best Live Jazz Performer” in 2006. Andy is also the Australian artist for Buffet Crampon clarinets, D’Addario Reeds, Julius Keilwerth saxophones and Lomax Classic Mouthpieces.

Andy Firth has performed with:

Andy has also performed with Australian and International symphony orchestras and chamber ensembles as featured soloist.

Andy Firth continues to tour and perform with Australia’s leading jazz and classical artists and ensembles. Andy is a regular guest performer at universities and colleges both in Australia and overseas.

Andy Accepts the role as “Paul Desmond” in the Australian Dave Brubeck Tribute Show and plays saxophone, mixes and produces the albums “Take Five” and “Time for Brubeck” for the Brendan Fitzgerald Trio.

Andy performs a sell-out tribute show to the great Charlie Parker with his trio.

Andy is awarded an Australian Jazz Achieve award for services to jazz music in Australia.

Andy enhances his reputation as one of the most gifted clarinetists since the great Benny Goodman with sell-out performances of his  “Benny Goodman Tribute” shows.

Andy is a guest soloist at the International clarinet and saxophone conference in Melbourne, Australia

Andy and his trio perform the sell-out audiences at “Jazz in the Pines”, Norfolk Island Jazz Festival.

Andy is commissioned to write music for the Trinity College, London music syllabus.

Andy performs the Siegmeister clarinet concerto with the the Queensland symphony orchestra under the direction of Guy Noble.

Andy is one of a very small number of Australian artists to have ever performed a concert under their own name at Carnegie Hall New York. On the evening of the 21st March 2008, Andy Firth played a concert billed as “Goodman & Beyond”to a standing ovation. Andy Firth’s guest artist for this special event was living legend and Andy’s clarinet mentor, Buddy DeFranco. A US rhythm section consisting of award winning artists, Gary Motley (piano), Paul Keller (bass) and Pete Siers (drums). The concert featured musical tributes to Benny Goodman, Artie Shaw, Buddy DeFranco, Eddie Daniels and Australian Jazz icon, Don Burrows.

“….A landmark Jazz performance took place with previously unknown Australian Clarinetist Andy Firth, who in a cheerfully informal way shocked and awed the audience with virtuosity found in players like Eddie Daniels. Similar in virtuosity, although different in style, his letup never quit during this concert, and as Buddy DeFranco said later on, Firth can do impossible things.” (Mike Getzan WKA).

Received rave reviews and standing ovations for his performances with the Atlanta Symphony Orchestra. Invited to perform “God Bless America” at Hamon’s Field Stadium Springfield Missouri to open the Springfield Cardinals baseball game followed by a live concert for the Springfield Phelps Society, now released as a cd called “Live in Swingfield.”

Andy was honoured with the Australian Mo Award for “Best Jazz Instrumentalist.”

Invited to perform Artie Shaw’s Concerto for Clarinet with the Sydney Symphony Orchestra.

Victor Morosco presented Andy with “The Fourths of Firth”, a suite for clarinet and strings with jazz overtones which is dedicated to Andy, and written specifically to introduce more contemporary jazz improvisation to the modern clarinet repertoire.

Screen Music Award for composition, arranging and performances on VISA “Dining Out” advert.

Andy has gained a rapidly growing reputation as a composer, having composed two lively, latin inspired pieces,“Treacherous Tango” and “Tycho, Tycho, Tycho” (pron:teeko) written for Janet Webb – (principal flautist of the Sydney Symphony Orchestra) these released on her debut Cd “Tango & all that Jazz”, as well as completing a “Cuban Fantasy” for flute and piano also for Janet Webb.

Andy’s reputation as arguably the most naturally gifted player since Benny Goodman, further enhanced by sensational performances in Germany, England, and the prestigious North Sea Festival in Holland. Andy was also a guest performer along with Diana Krall, Phil Nimmons and Ed Soph at Canada’s MusicFest in 1998 where he received standing ovations for his performances of Benny Goodman’s classic hit “Sing, Sing, Sing”.