2. In The Afterglow (based on “Moonglow”)

6. The Worm That Turned (based on “Confirmation”) 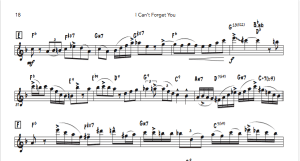