GROOVIN’ WITH THE MOUNTAIN KING

GROOVIN’ WITH THE MOUNTAIN KING

About GROOVIN’ WITH THE MOUNTAIN KING

Composed in 1875, this now-famous theme was composed as a scene in act 2 of Henrik Ibsen’s play, “Peer Gynt”. It was later extracted and used as the final piece in Grieg’s “Peer Gynt” suite 1.

This big band arrangement adds a funky groove to the iconic theme.

First played by the saxes, the theme is then passed along to the trumpets & trombones before returning it to them once more.

The saxes then return with the theme in a new key before the work ends in the spirit of the original work.

This arrangement is sure to be a hit with your players and audiences alike.

Level: Intermediate. Trumpet 1 plays a few high “D3” at the close of the chart.

The chart also involves some semi-quaver lines in the saxes but these should for the most part “fall under the fingers” for a good standard of intermediate level player.

Technical and Ranges: Tpt 1: A few high Ds above stave at end of the chart.  Trom 1: G above the stave. 4th Trom: Bass but has been converted for tenor trombone. 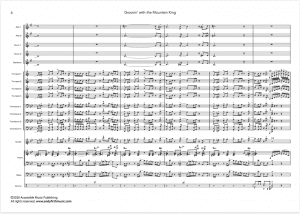 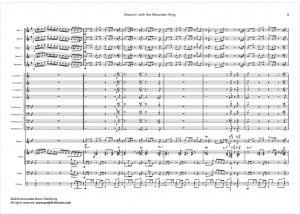 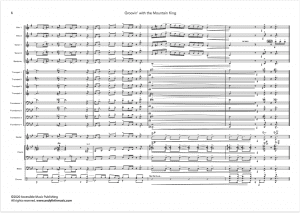 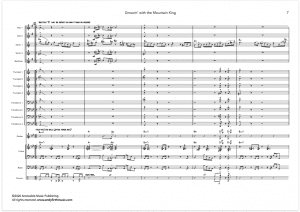 AUDIO PERFOMANCE-GROOVIN' WITH THE MOUNTAIN KING