Vivace Trio in Eb Major Op.436 is a trio for Bb clarinet, viola and piano.

The work consists of four contrasting movements and is designed to be of an advanced level chamber work for the clarinet.

Vivace Trio in Eb major Op.436 was first sketched in 2009 and over the years was altered, re-scored, recorded, and revamped until the final version that appears here was finalised in 2021. The name of the work comes from the name of Andy and his wife’s home in Newcastle Australia, “Vivace Cottage”.

The first movement is inspired by WA Mozart’s “Kegelstatt Trio” k.498 with all three instruments stating the main theme in unison right from the beginning. The clarinet then further completes this theme which leads to the 2nd theme. Section “B” introduces a variation of the main theme played in the relative minor key (C minor).  A new theme appears in section “C” before returning to the main theme once more.

A new theme is then introduced, extended and developed before the work reaches a recapitulation of the 1st section of the work at “G”. Shortly thereafter the work comes to a conclusion via the statement of the main theme.

Set in C minor, this movement begins with the clarinet stating the main theme for the first ten bars before relinquishing it to the viola in section “B”.  A more urgent, heavier and syncopated theme emerges in section “C” which is then transferred to the piano in section “D” of the movement.

A new theme is introduced by the clarinet in section “E” which introduced a flowing triplet feel to the movement. This triplet feel is then continued and applied to the thematic material in section “F”. This theme then becomes more fragmented and unstable by being rhythmically displaced and extended (section “G”) before being stabilised and re-established by the piano in section “H”.

This movement commences with a simple, plaintive theme performed by all three instruments in harmony for the first eight bars of the movement. This theme is then carried by the viola and accompanied by intermittent flourishes from the clarinet and piano leading to the second theme for the movement.

The viola then takes this theme in section “F” whilst the clarinet and piano accompany this with quick moving harmonised flourishes and passages. A more urgent and dramatic theme based on the material of the first theme emerges which leads to a giocoso-styled section featuring the viola as the lead and accompanied by decorative, quick-moving flourishes from the clarinet and piano.

A recapitulation of the first sections of the movement appears in section “H” which then leads to a somewhat reflective, doloroso but graceful resolution to the movement.

The final movement of this work begins with a defiant, strident theme played in unison by all three instruments. This then leads to the softer more romantically-oriented first theme played by the clarinet, (section “A”). The second half of this theme is stated in the viola part and accompanied by flashes of virtuosic passages in the clarinet part, (section “B”).

The viola plays the second half of this new theme in section “H” before the clarinet swoops in once more and plays the final section of this theme.

A merging of this theme played by the viola and piano with that of the first main theme from movement 1 (played by the clarinet) occurs and this leads to a new more military-styled brash and rhythmically-forceful theme played by all three instruments. This theme builds in intensity before culminating in a virtuosic sweep of arpeggios in the clarinet part leading to a held top “A4”.

After a short lull in the music and a short silence-a surprise! A recapitulation of the main theme from the first movement of theme work in the key of Eb major and as it originally appeared in the movement.  The material from the first movement is faithfully re-stated as it appeared but this time it leads to a quickly accelerating passage that intensifies and builds. This passage then leads to the final statement of the main theme from movement 1 played in unison by all three instruments which then leads to the final three chords that bring the work to a defiant but satisfying conclusion. 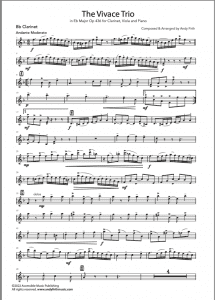 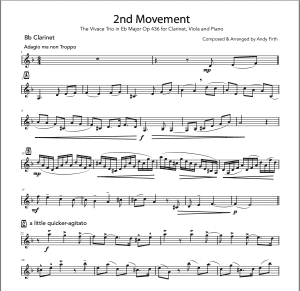 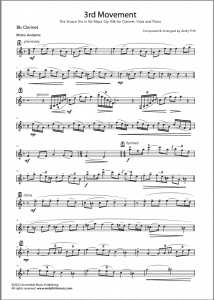 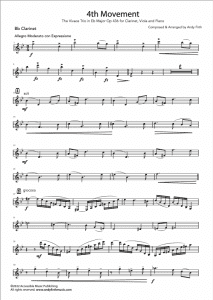 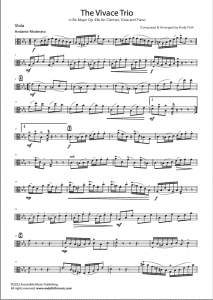 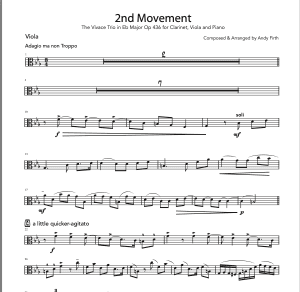 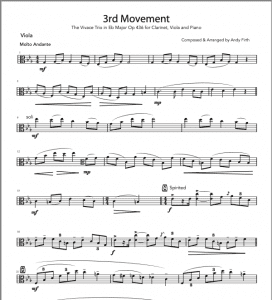 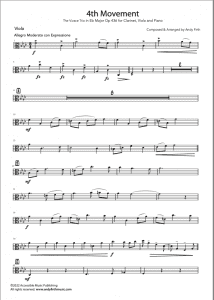 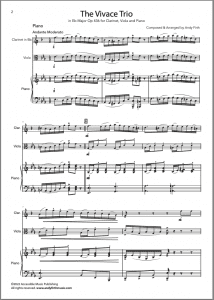 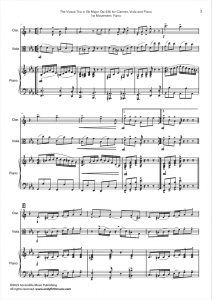 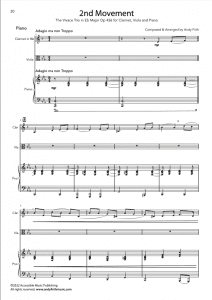 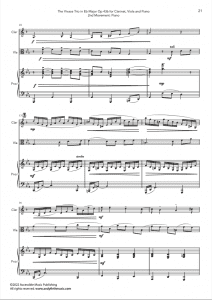 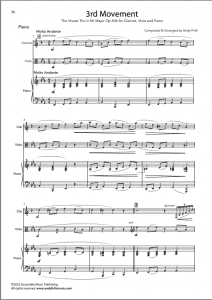 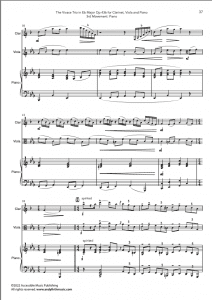 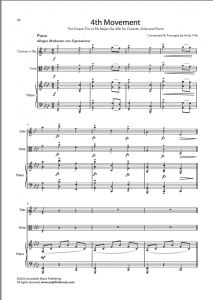 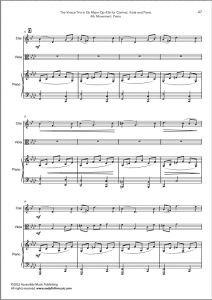 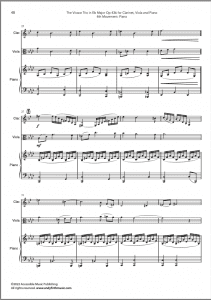